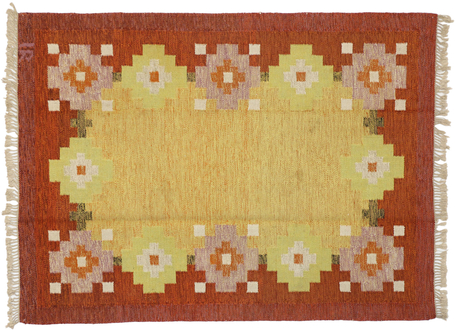 74940 Scandinavian Modern Swedish Rollakan Kilim by Ida Rydelius, Flatweave Kilim Rug. This hand-woven wool vintage Swedish Rollakan Kilim rug was designed by master weaver, Ida Rydelius, circa Mid-20th Century in Scandinavia. It features an open abrashed field surrounded by a large-scale geometric pattern composed of stepped medallions flanked with small cube squares. The different colors unite to form an overall whimsical composition. This flat-weave Swedish kilim rug is rendered in variegated shades of falu red, orange, plum, yellow, and beige with other accent colors. In Sweden, the color Falu red originated from the copper mine at Falun in Dalarna, Sweden and was reserved for the privileged class. Displaying balanced symmetry and bold geometric shapes, this vintage Swedish flatweave rug would bring a sense of Scandinavian Modern style to nearly any space. Perfect for adding organic tactile sensations to a living room, bedroom, front room, game room, study, studio, office, or large sitting room. Well-suited for a variety of interiors: Scandinavian Modern, Mid-Century Modern, Bohemian, Boho Chic, Swedish, Art Deco, Cubism, Hygge, Organic Modern, Danish Design, New Nordic, Japandi, Zen, Contemporary, Modern, Contemporary Scandinavian, Scandi, Farmhouse, Urban Modern, Memphis, Post-Modern, Retro, and Eclectic. Scandinavia is comprised of the three kingdoms Norway, Denmark and Sweden. Scandinavian carpets and rugs have been made in Sweden for centuries, taking on many different forms and functions over the course of time. Rollakans, a traditional flat-weave, was probably was of the most significant contribution. They were popular among the folk artists and used as bed coverings. These Rollakans are highly sought after in today’s marketplace due to their perception as typical Swedish compositions and this particular piece was signed in the weave by Ida Rydelius. Abrash. Hand-woven wool. Made in Sweden. Red Flat-Weave Rug Kilim. Measures: 5'08 x 7'08. Flatweave Kilim Rug. Also Known As: Röllakan or Rolakan.