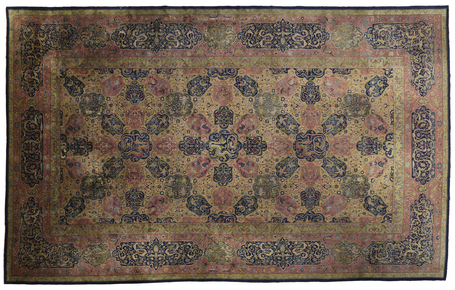 77150 Antique Indian Agra Palace Size Rug with Dragon and Phoenix Design 15'02 x 24'04 From Esmaili Rugs Collection. This is a rare example of an antique Indian Agra palace size rug featuring the 16th century Persian carpet design of the Dragon and Phoenix motif. A series of alternating colored cusped cartouche are filled with arabesque vines and the dragon and phoenix motif on field of swirling vine scrolls and rosettes. A complementary cartouche border flanked with a meandering vine and rosette guard band. The phoenix and the dragon first came to Iran (Persia) with the Mongols and seen as symbols of the benign power of the Chinese Emperor and Empress from the Ming dynasty. The Dragon and Phoenix complement each other creating balance. The Dragon is 'yang' while Phoenix is 'yin'. Hand-knotted wool. Made in India. Measures: 15'02 x 24'04.