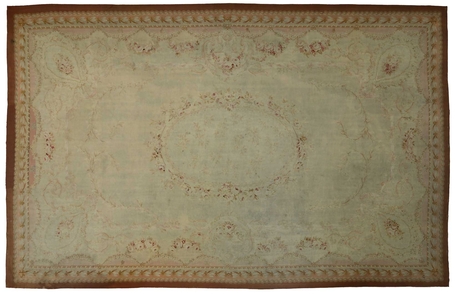 76845 Late 19th Century Antique French Aubusson Palace Rug with Romantic Rococo Style. With bountiful Aubusson roses and French Provincial style, this Late 19th Century Antique French Aubusson palace rug was spared no expense. A decorative centre medallion of roses is rendered in rich and refined variegated shades of pink and blush to the luscious olive green foliage. Regal, refined and opulent, French Provincial style is always trending. Whether cozy casual of French country or the lavish Rococo, this antique Aubusson rug will create an ambiance of romantic luxury. Antique Aubusson carpets rugs characterize the formal grace and elegance of classical European and French design. These European rugs were made for the royal palaces, gifts and other important commissions. European, Aubusson carpets and French Savonnerie rugs are typically decorated with swags, florals and vines in baskets, garlands in soft pastel colors, on a dominant ivory field. This Late 19th Century Aubusson rug is characterized by designs customary for Aubusson arrangements, illustrating this style of predominate French influence with patterns of ornate armorial medallions, held in intricate borders of rinceaux and winding arrangements of garnished foliage. The symmetrical placements of opulent frondescence, with ribbon and ornamentation to further compliment them in decadence, held antiquated sway in these forms of display and were used commonly during a period when Rococo infiltrated and commanded the French luxury arts of the time. Such works of this late Baroque era would lend rich, florid and an increasingly graceful appearance to interior design, as can be noted in the piece featured here. These colors join to create a truly compelling dance, and inaudibly speak with a timeless voice that is characterized by sensual decadence, as well as by stately action. All facets of this piece collectively entwine to form the striking and grand charm of a textile that is worthy to depict the tender, emotive, and vibrant details of humans and histories, no longer known. Well-suited for opulent period interior styles: French, Victorian, Rococo, Renaissance, Neoclassical, French Provincial, Gustavian, Swedish Farmhouse, Rustic Feminine, French Cottage, or European Country. Perfect for a bedroom, living room, dining room, front room, great room, state room, family room, studio, study, loft, lounge, office, library, parlor and sitting room. Age Wear. Abrash. Made in France. Measures: 13'07 x 21'02.