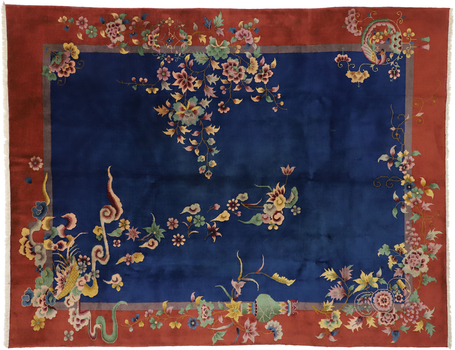 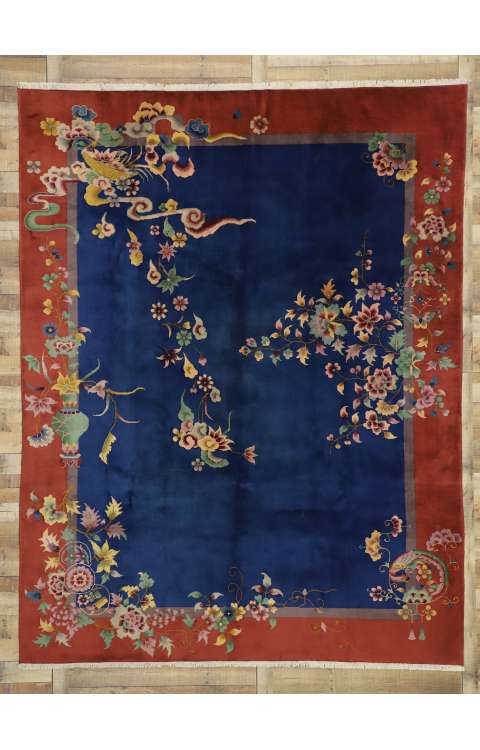 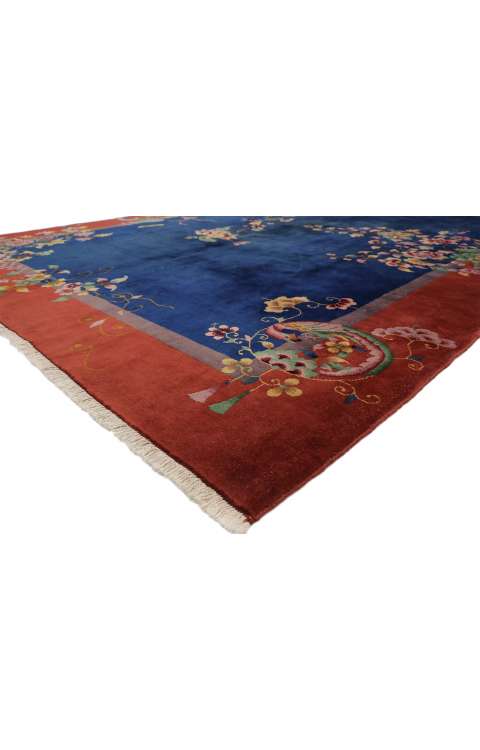 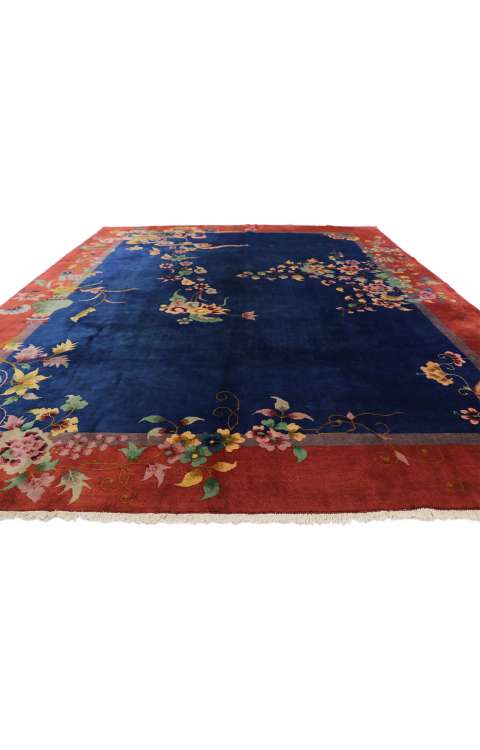 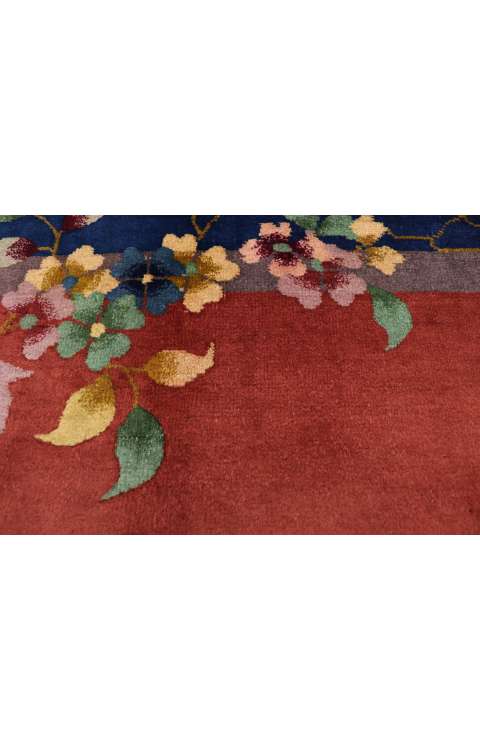 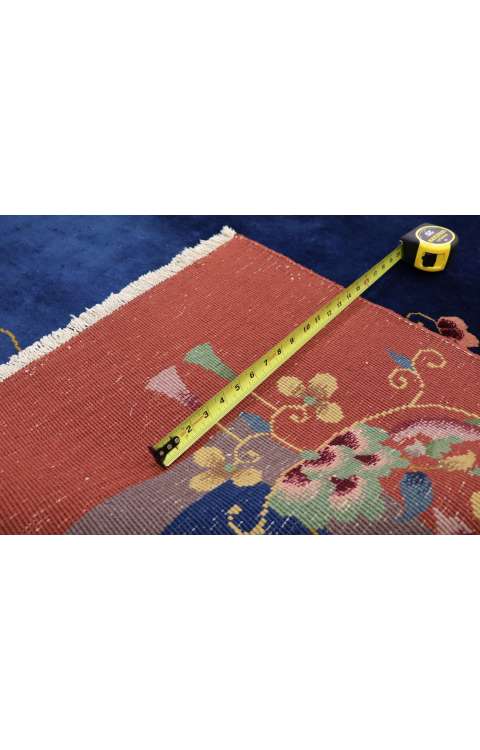 77354 Antique Chinese Art Deco Rug with Jazz Age Chinoiserie Style. This hand-knotted wool antique Chinese Art Deco rug features elegant sprays of flowers interlaced with a variety of auspicious symbols overlaid upon an abrashed navy blue field and brick red border. The colorful, intricate floral motifs showcase lotuses, peonies, chrysanthemums, and plum flowers blossoming in a swirl of tantalizing vinery. This ensemble of flowers, when appearing together, represents the Four Seasons, while each of the flowers carries its own meaning in Chinese culture. The lotus, the flower of summer, symbolizes purity and perfection, since its clean vibrant blooms emerge from the mud of swamps and marshes. Peonies, the flower of spring, represent unparalleled beauty and honor; they have long been regarded as a symbol of wealth. Chrysanthemums, the flower of autumn, are associated with long life and a golden retirement; the dried petals of the flower immersed in wine were once thought to bring longevity to those who drank it. Plum blossoms, the flower of winter, represent fortitude and resilience, since the long-lived tree blooms brightly during the cold of winter. At the top left of the composition, the flowers, along with along with sprigs of bamboo and lingzhi fungus, spill from a basket nestled within a bed of delicate ruyi clouds. Typically, a basket of flowers is regarded as the emblem of Lan Caihe of "The Eight Immortals” of Taoist folklore. Each of the immortals was known to carry a specific article, which are regarded as the Eight Treasures of Taoism. In the case of Lan Caihe’s flower basket, the symbol is emblematic of old age, and the basket is filled with symbols associated with the notion of long life and immortality. In this particular antique Chinese Art Deco rug, along with the traditional flowers, the basket contains sprigs of bamboo and lingzhi fungus. Because the bamboo plant never loses its leaves, it is regarded as a symbol of old age and longevity, while the plant is also seen to augur good luck. Lingzhi fungus is also sometimes referred to as the “plant of immortality.” According to Chinese legend, the fungus is believed to have magical properties, and its ingestion is said to grant immortality to those who consume it. It is said that only the phoenix is able to locate the fungus, as it is thought to principally grow high in the mountains of the Islands of the Immortals of Taoist philosophy. Below the basket on the left side of the composition, a flowering vase set upon a small table is used to represent eternal harmony. On the right side of the composition, two graceful butterflies flutter amongst the glorious sprays of flowers. Butterflies are associated with happiness, while a pair is meant to symbolize fidelity. Finally, the lower right corner of the composition is adorned by a majestic phoenix arranged in a circle alongside flowering tendrils. Phoenixes, known in Mandarin Chinese as Fenghuang, are among the most treasured of Chinese symbols, representing good luck, elegance, virtue, nobility, honor, integrity and peace. Aside from the rich cultural symbolism attached to each image, the array of flowers, creatures and objects are all beautifully rendered in a marvelous color palette of jade green, soft pinks, soothing lilacs, sumptuous blues, and golden hues set against a luxurious royal blue and rich rusty red backdrop. The expert use of shading gives a great deal of dimension and a naturalistic appearance to the fantastic motifs, creating a truly outstanding design with undeniable beauty. With its depth of meaning, fine attention to detail, and glorious composition, this stunning antique Chinese Art Deco rug would bring a touch of Jazz Age splendor to any interior. Perfect for layering with silk, fur, velvet and pairing with Lucite, chrome, marble, high-shine and lacquered surfaces, mirrored objects, ornate Art Deco filigree furniture, crystal chandeliers, Canton style jars, and Louis IV chairs. Rendered in variegated shades of burnt orange, terra cotta, royal blue, mauve, rose, lavender, jade, avocado, saffron, goldenrod, maroon, burgundy, brown, tan, cerulean, plum, raisin, peach, coffee, and mint with other accent colors. Perfect for a living room, dining room, front room, bedroom, study, private library, home office, den, family room, large sitting area, studio, theatre room, private Chambers, state room, great room, music room, or lounge area. Well-suited for a wide range of interior styles: Art Deco, Asian Antique, Asian Modern, Chinese, chinoiserie, Japanese, Ming, Qing Traditional, Eclectic, Modern, Contemporary, Manor House, Neoclassical, Mid-Century Modern, Hollywood Regency, and Jazz Age. Abrash. Hand knotted wool. Made in China. Measures: 08'09 x 11'02.