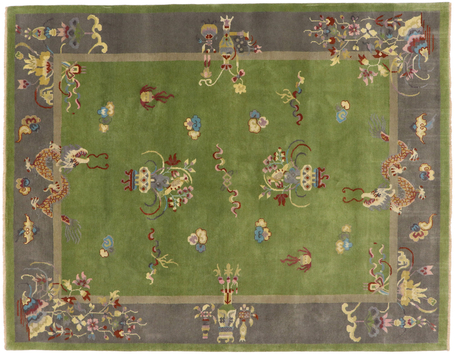 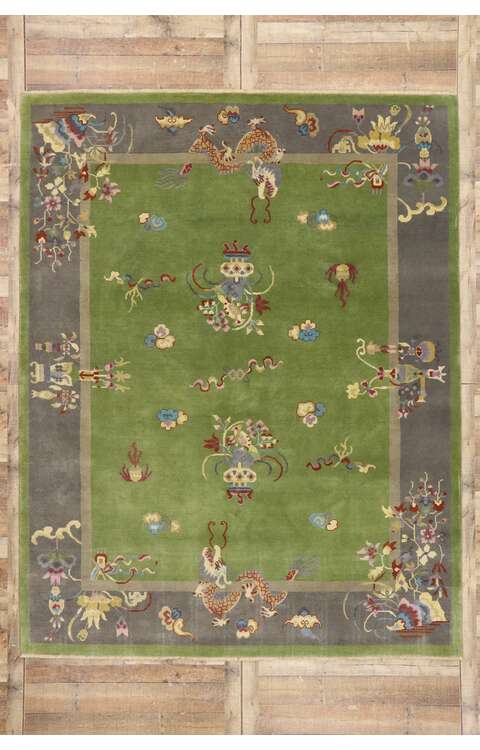 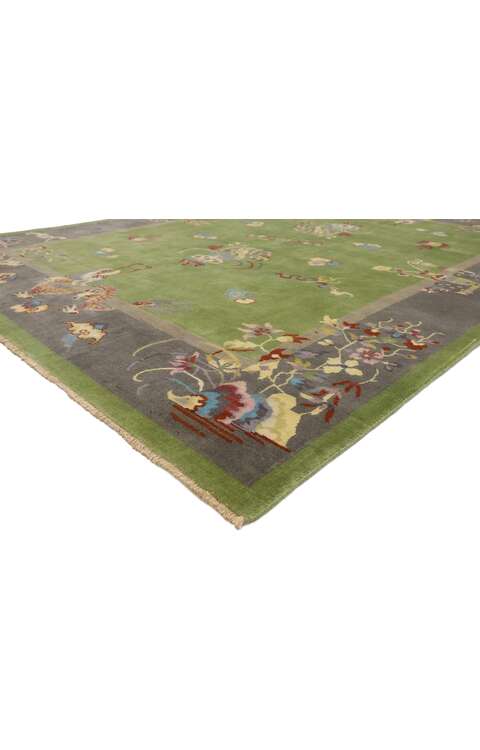 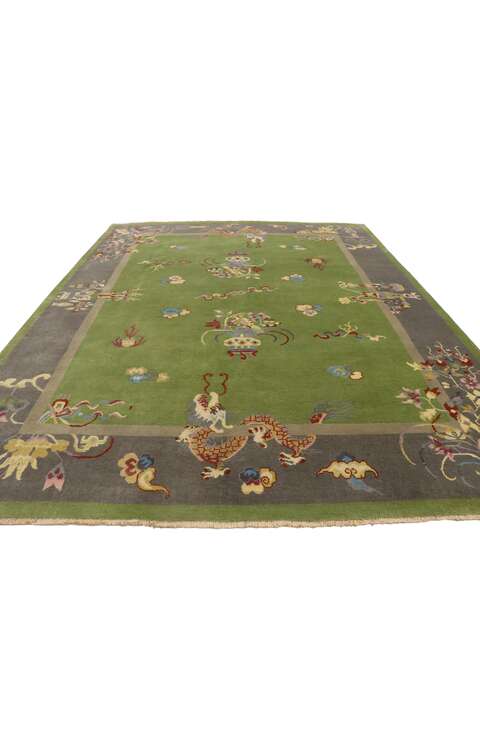 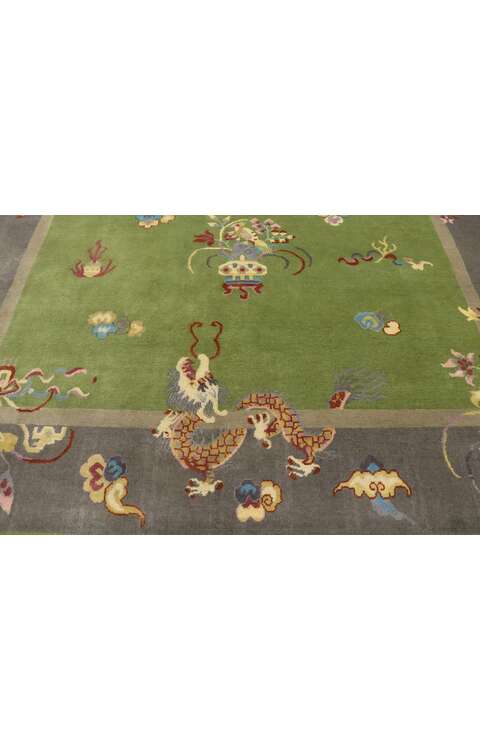 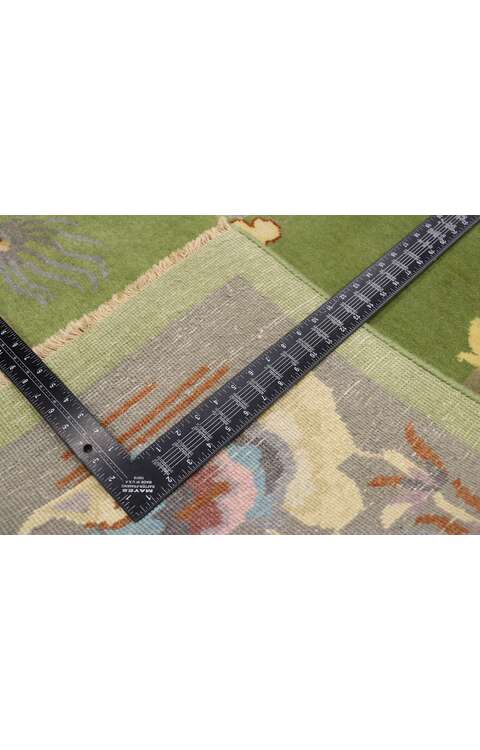 30670 New Contemporary Chinese Art Deco Dragon Pictorial Rug 08'02 x 10'05. This hand-knotted wool contemporary Chinese Art Deco style rug features a variety of pictorial images overlaid upon an abrashed color-blocked field and border scheme. An array of auspicious symbols are scattered throughout the green hued field, while representations of dragons and floral motifs break from the border into the center of the composition. The interplay between the piece’s various decorative elements gives the composition a great deal of movement and visual interest while also creating a strong sense of story. Perhaps the most arresting images are the two dragons that anchor either end of the piece. Seen as possessing unrivaled power, strength, and nobility, the dragon, known in Mandarin Chinese as “Kuilong,” is amongst the most beloved symbols in Chinese culture. The mythical beast was once thought to have the power to control the elements and climactic changes such as floods, drought, rain, thunder and lightning. In this particular antique Chinese rug, the two serpentine dragons coil around the inner border with their heads and long whiskers aimed towards the center of the piece. As the dragon is seen to reside in the heavens, several Ruyi clouds and ribbon-like cloud bands are scattered throughout the composition. Dragons are often depicted as chasing after luminous flaming pearls, which are thought to represent wisdom and enlightenment. Two flaming pearls decorate the field amongst the clouds and two prominent vase motifs. Each of the vases is potted with blooming lotuses with a paradise flycatcher, thought to represent long life, perched in the branches. Large lotus motifs adorn each corner of the piece, shown blooming both from mounds of soil and from vases. Traditionally, the lotus symbolizes purity and perfection, since its clean vibrant blooms emerge from the mud of swamps and marshes. Completing the composition, two pictorial rebus motifs adorn each side of the piece, extending from the border into the field. The use of sound rebuses is prevalent in Chinese symbolism, in which certain words or phrases have lucky homophonic images associated with them. In this particular piece, an arrangement with a large vase sitting on a table containing Lingzhi fungus and gracefully adorns one side. Sometimes referred to as the “plant of immortality,” according to Chinese legend, the fungus is believed to have magical properties, and its ingestion is said to grant immortality to those who consume it. The classic symbol a vase containing fungus that is set upon a table has a unique meaning related to its pronunciation in Chinese language. The phrase for “fungus in a vase on a table” is read in Chinese as “ping’an ruyi,” which, when pronounced, is homophonic for a phrase meaning “safe and secure as you wish it.” Directly opposite on the other side of the piece, another vase holds three Ji, an ancient iron weapon similar to a trident or halberd. When appearing as a group of three inside a vase, the composite image is associated with another sound rebus. The phrase for “three Ji in a vase” is read in Chinese as “ping sheng san ji,” which, when pronounced, is a homophone for a phrase meaning “to be promoted by three ranks,” and is thus a symbolic good omen. Aside from the rich cultural symbolism attached to each image, the array of flowers, creatures and objects are all beautifully rendered in a marvelous color palette. The expert use of shading gives a great deal of dimension and a naturalistic appearance to the fantastic motifs, creating a truly outstanding design with undeniable beauty. With its depth of meaning, lush color palette, and well-harmonized composition, this lavish Chinese Art Deco style rug would be a truly stunning addition to any interior. Perfect for a great room, wine cellar, executive suite, conservatory, state room, royal suite, hotel lobby, music room, living room, dining room, drawing room, private library, golf locker room, billiards room, clubhouse, large home office, master retreat, private Chambers, studio, study, loft, lounge, entertainment parlor, trophy room, large bedroom, or formal sitting room. Iconic in its styling, this rug would be well-suited for a wide range of interior styles, including Art Deco, Jazz Age, Traditional, Eclectic, Modern, Neoclassical, Georgian, Regency, Empire, Victorian, Arts & Crafts, Craftsman, Edwardian, Art Nouveau, Colonial Revival, Hollywood Regency, Mid-Century Modern, English Country, Romantic, Bohemian, boho chic, Chinoiserie, Asian Antique, Asian Modern, Japanese, Ming, Qing and Republic Period. Rendered in variegated shades of avocado, pistachio, green, gray, slate gray, beige, sky blue, navy blue, brick red, rose, pink, mauve, brass, lavender, and tan with other accent colors. Abrash. Hand-knotted wool. Made in India. Measures: 08'02 x 10'05. Brand New. In-Stock.