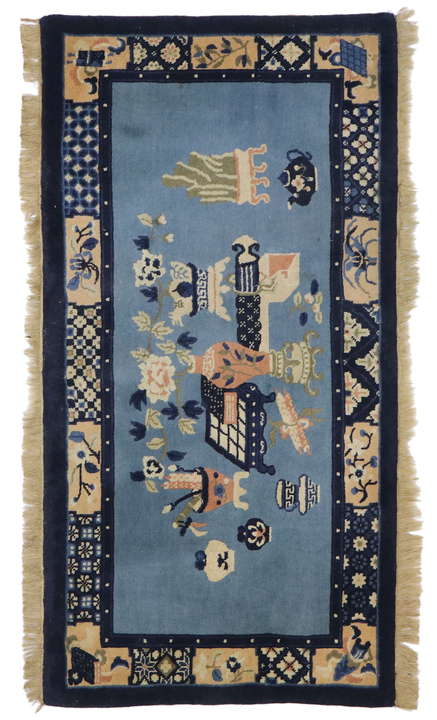 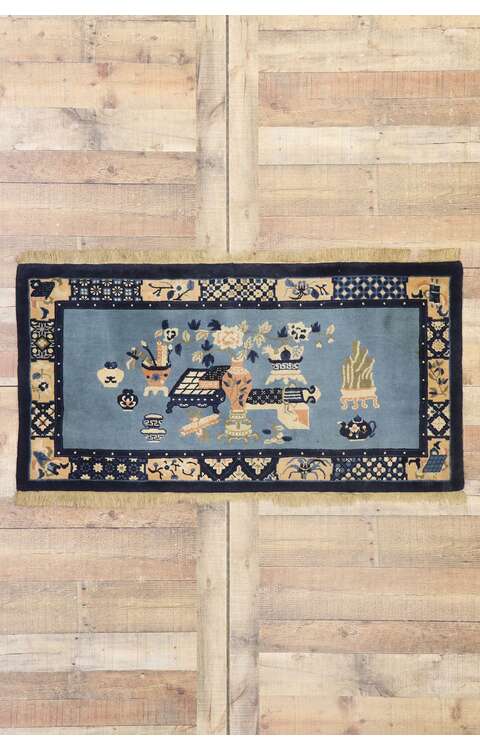 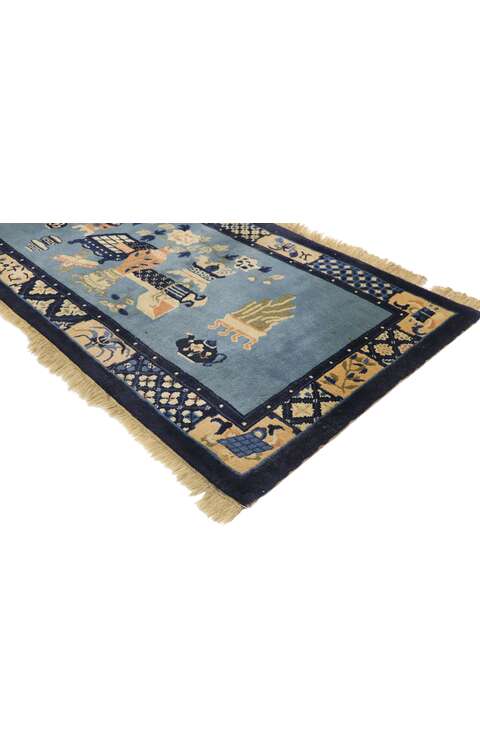 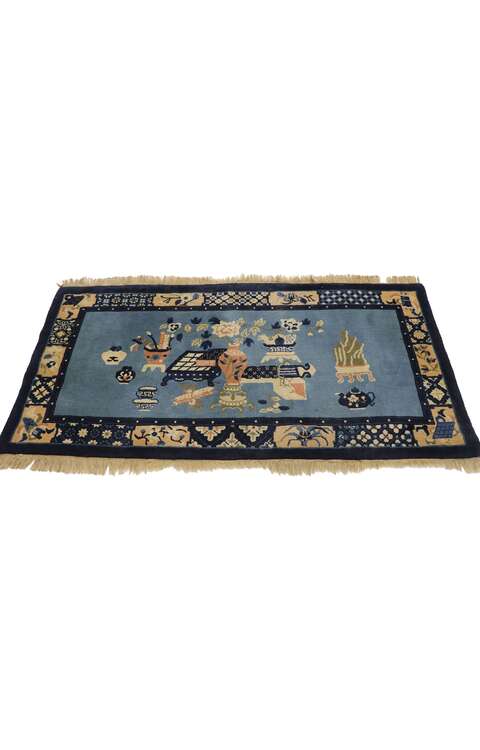 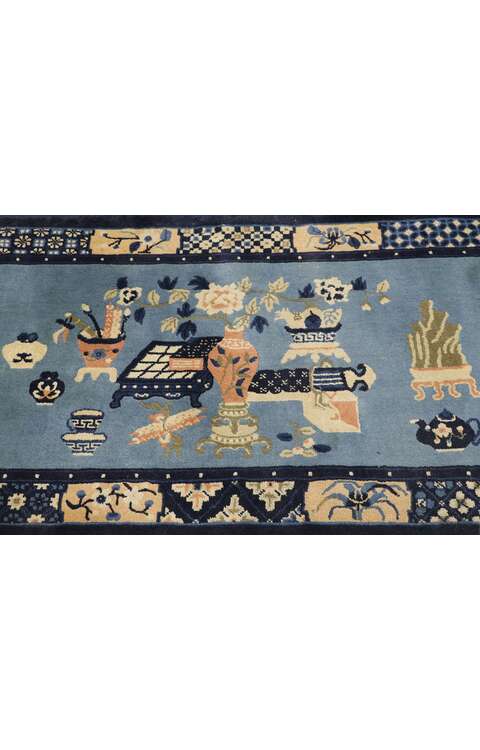 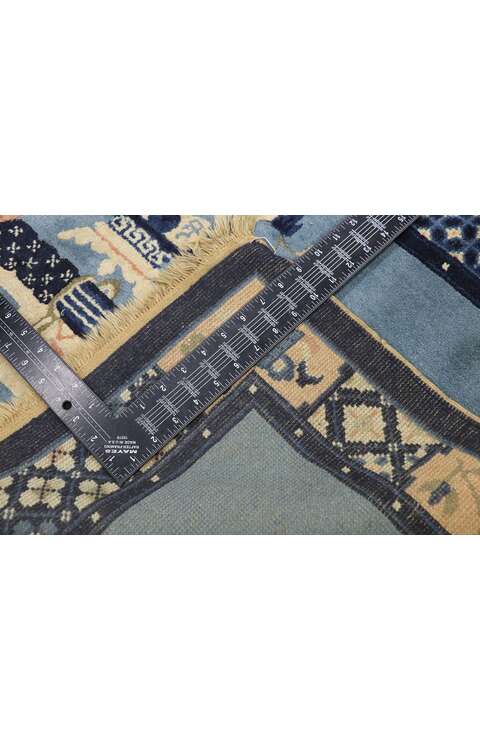 77586 Antique Chinese Baotou Scholar’s Rug with Confucian Pictorial Design 02'05 x 04'07. This hand-knotted wool antique Chinese Baotou rug features a pictorial design overlaid upon a rich blue field. With its cold, arid climate ideal for raising sheep, Baotou, a city in the Inner Mongolia region of China, was a major weaving center known for producing high-quality wool. The city was also important due to its location along the trade routes between two other major weaving centers: Ningxia and Beijing. In the second half of the 19th century, a mural painter of temple walls introduced pictorial representations into carpet making in Baotou. This particular antique Chinese rug boasts the realistic pictorial composition and soft, plush pile that are characteristic of the beloved Baotou rugs. The scene depicted in this piece features a variety of scholarly objects arranged in a still life design. The objects on display are firmly rooted in the philosophies of Confucianism, which prizes scholarship and self-cultivation as a means of attaining harmony on earth and an idyllic society. The four main symbols of Confucianism are the harp, chessboard, books, and scrolls, all of which are featured prominently in this piece, represented not only in the field design, but also in each of the four corners of the border. In the center of the field an ornate vase contains flowering peonies, a symbol of beauty and honor. To the left of the vase, a variety of objects can be seen: a bundle of scrolls, a vessel containing calligraphy brushes, some ink pots, and a teacup and saucer. To the right of the center vase, a Chinese harp half-enclosed in a bag, a bowl of fruit, a small fire, and a teapot are shown, as well as a small sprig of flowers for good measure. These objects are depicted in a realistic manner with great detail, and the grace with which they are rendered gives a sense of dignity and tranquility to the scholarly motifs. The main border repeats the harp, chessboard, book, and scroll motifs along with a patchwork of geometric floral patterns and realistic renderings of a variety of traditional floral motifs, including, lotuses, peonies, chrysanthemums and plum blossoms. These four flowers when pictured together represent the four seasons. A simple pearl dot inner guard borders adds a delicate touch to the overall composition. With its depth of meaning, fine detailing, classic color scheme, and philosophical underpinnings to boot, this antique Chinese Baotou rug would be a wonderful addition to any interior, and, with its scholarly motifs, might be particularly lovely and appropriate for a study or library. This piece has been rendered in variegated shades of true blue, cornflower blue, sky blue, cerulean, azure, sapphire, ink blue, navy blue, royal blue, cobalt, indigo, apricot, salmon, peach, coral, terra cotta, clay pot, camel, tan, khaki, ecru, cream, vanilla, ivory, and almond. It would be perfect for a small space, kitchen, reading nook, master bathroom, grand foyer, designer entry, study, studio, den, walk-in closet, stair landing, alcove, mudroom, entryway, bedroom, private library, private chambers, living room, front room, wine cellar, conservatory, drawing room, trophy room, game room, music room, listening room, or hotel lobby. It would also make a lovely accent next to a buffet in a dining room or behind the sofa table in the living room. Iconic in its styling, this antique Chinese Baotou rug would be well-suited for a wide range of interior styles, including Traditional, Transitional, Eclectic, Modern, Neoclassical, Georgian, Regency, Empire, Victorian, Arts & Crafts, Craftsman, Aesthetic Movement, Edwardian, Jazz Age, Art Deco, Hollywood Regency, Mid-Century Modern, English Country, French Provincial, Bohemian, Boho Chic, Chinoiserie, Asian Antique, Asian Modern, Japanese, Ming, Qing and Republic Period. Abrash. Hand-knotted wool. Made in China (Inner Mongolia). Bao Tou. Pao Tou. Measures: 02'05 x 04'07.